I’ve been floundering lately, feeling overwhelmed and undercompetent a lot. I’m glad for the Thanksgiving holiday to help me escape the funk. What a great idea – a holiday about gratitude. I do have so much to celebrate.

So many people say I’m grateful for my family, and I truly am. But that seems so general. For the ones I see all the time, there are specific things I appreciate about each of them.

My mom: First, I’m thankful she’s here to celebrate another holiday with us. We have our differences of opinion, but I’m happy I learned from her the value of doing your best to figure out what’s right and do it. You don’t really see your parents in context until you’re grown and you find out how differently some other people were raised.

There were things I didn’t know to be thankful for when I was growing up, but I do now. My mom never criticized my appearance. She had her ideas about appropriate clothing as far as modesty and I have different standards now, but beyond that, she never said a bad word about my weight, my hair, my complexion, any of it. I took this for granted, not knowing at the time how many girls were developing terrible self-images based on their parents’ critical remarks. Sure, I got plenty of it from society at large, but not getting it from my mom helped me not internalize it. In fact, my mom has never criticized anyone based on looks, or even commented on looks much at all, except for the occasional compliment on a new hairstyle or saying “That color looks good on you.” I’m thankful I was taught by example not to judge someone on appearances.

My husband: I recently read an article about a study of cities in the U.S. that said our little city is one of the hardest-working. My immediate response was “That’s because my husband lives here. He skews the results.” He’s always been willing to work however many hours it takes to get a job done, and is currently doing freelance projects on the side in addition to his day job.

My firstborn (18 years old now): I appreciate her enthusiasm. When she enjoys something – a book, movie, tv show, pet, food – she enjoys it thoroughly and without embarrassment. And she loves to see others enjoying things in equal measure, even if it’s not the same things. She embraces diversity of tastes. And she finds fun ways to share the excitement over her interests. The other day, when I got out of the shower, the mirror was all steamed up. There in the condensation clearly appeared the words “Welcome to Night Vale.” I have one suspect. One. I’m going to miss these little happenings when she eventually moves out.

My younger child (now 15): He has incredible focus and stamina when he’s working on a project. His two big interests are music and computer programming. In either area, he can work for hours on end. There may be an attention span deficit in his generation, but he doesn’t contribute. And then I get new music in my life. So what’s not to like.

I’m leaving now to pick up my mom and bring her to our house for the day. Happy Thanksgiving! 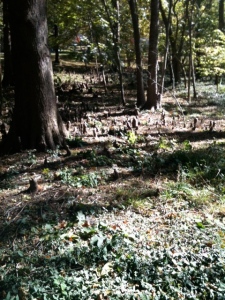 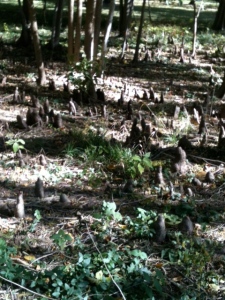 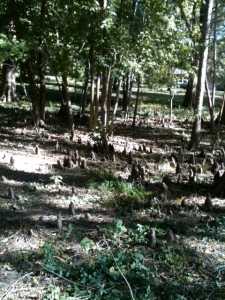 And woman’s, I would add. I’m lucky to live in a good walking neighborhood. One of my favorite spots is a park a few blocks away. It has no playground equipment. But it has a stream running through the middle, some open grassy areas, lots of trees and a couple of mysteries.

What are those things coming up out of the ground? I keep walking past them and wondering. They’re made of tree-like material. My best guess is that they’re part of the surrounding trees’ root systems. Some day I might do some research and find more information. But for now, I want to keep my walks to their intended purposes – get some exercise and get outside my head. Shutting down my overactive mind, giving it a rest, is one of the biggest benefits of my regular constitutionals. At this point, I prefer to enjoy the unusualness of the sight without having to know everything about it.

Nothing clears my head more effectively than a good walk outdoors. It’s always been my go-to. When my kids were little, I had a fancy schmancy two-seater wagon with cup holders. I’d often load them in with sippy cups and snacks and pull them around the neighborhood. And the day generally went better afterward.

Now that they’re young adults, I walk alone most of the time. I’m an introvert so this works for me. It’s my time not to have to think about my mom’s Medicaid paperwork, or whether my son is caught up on his homework, or getting the leaking shower fixed. All of those things will be waiting for me when I come back. And I’ll be less likely to snap at anyone over them.

Walking – free, easy, requires no special equipment, and it makes me feel good. Hippocrates couldn’t have been more right.