Per his wishes, my dad was buried wearing a Kansas City Royals necktie with his suit. That was seven years ago. He and I didn’t always have a great relationship, but there was one subject that united us and created a bond – baseball. I grew up in Kansas City during the Royals’ heyday. Everyone in the family liked the team, but my dad and I were the true die-hard fans, shushing people in the car on the way home from church because the game was on the radio. I was the only one who followed closely enough to discuss statistics with him, to join in the analysis of whether the manager was making a feather-brained decision or a smart move. In the overall scheme of things, I knew he had a favorite kid and it wasn’t me. But as long as we stayed in the realm of baseball, I was his golden child.

Here’s what I remember. My dad hated sacrifice bunts to the point of vein-popping apoplexy. “You’re deliberately getting an out! How is that smart? The point of the game is not to get out!” I can still hear his voice in my head. As much as he hated bunts, he loved base stealing, and the Royals came through for him. They’ve always been a speedy team. He was a number one fan of “that George Brett kid.” And Dad despised the A’s for being deserters. He never forgave Charlie Finley for moving them out of Kansas City. Dad’s relationship with the Royals was a second marriage of sorts. Any time the new spouse could show up the ex, he reveled.

During the last few years of my father’s life, he was pretty far gone with dementia. It was difficult and heart-wrenching a lot of the time, but there were compensations. For instance, he didn’t know how terrible the Royals were during those years. Sit him in front of a TV with a baseball game on it and he’d be happy, thinking every hit was made by then-retired Brett and every stolen base was taken by Royals’ former short-stop Fred Patek. I spared him the truth of the team’s win-loss record. 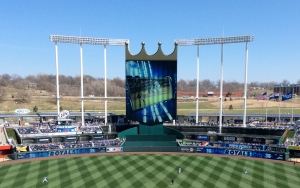 Through the past 29 years of mostly losing records and post-season non-glory, I’ve always believed the Royals would rise again. No fair-weather fan am I. Not a deserter like Charlie Finley, I stick with my home team through good times and bad. And good again, at long last. They squeaked their way into a wild card slot this year. Aptly named, as the game was one of the wildest post-season contests I’ve ever seen, with the Royals coming from behind late in the game, eventually overtaking Oakland in twelve innings, with one improbable run after another.

Hey dad, it’s Blue October. Hey, look! The Royals beat the A’s to move on to the playoffs. The A’s, Dad! And our team tied a record for most stolen bases in a post-season game, with seven. You would have loved it. Dad, George Brett is working in their front office now, and his reaction to the final run has gone viral. Um, viral means something different from what it used to, by the way.

They won the first game of the playoffs, too, going extra innings again. I stayed up until midnight, watching to the end. Remember how you used to let me stay up if it was for an important baseball game? I’ll probably stay up late again tonight for the next game. I wish you could watch it with me, Dad.