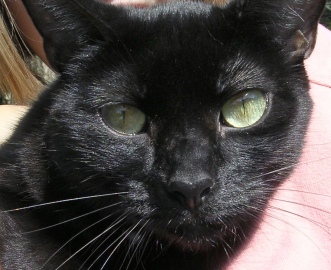 This critter staring at you from the screen is named Luna. Feel free to extend her birthday greetings, as she is fifteen years old this month. She’s been a member of our household from the age of eight weeks, coming to us about the time my youngest kid was turning four. The two of them bonded immediately. She’s supposed to be my cat, but I’m the only one who signed that contract; she never agreed to the terms and conditions. As far as Luna is concerned, she has one human — the boy she helped raise.

Both of my children are good with animals, and even at such a young age, my son showed a remarkable gentleness with our tiny kitten. The two of them spent many hours playing and snuggling. It wasn’t uncommon for my son to fall asleep with the cat wrapped in his arms.

The boy is considering moving away again in the fall. I hope it doesn’t break either of their hearts too much.