My firstborn has flown again. What was originally planned to be a one-week visit with us turned into a six-week stay, thanks to the timing of the pandemic. But he left Sunday to drive halfway across the country to his new life in the Pacific Northwest, arriving at his destination on Tuesday night. I have so much admiration for his courage in pursuing his dreams. I think he’s in a place where he’ll thrive. At least I hope so.

He was a good son and messaged his mother at every stop to let me know he was still alive. Here’s part of our exchange from Monday. Caveat to readers in states mentioned: he and I both know there are a lot of positive things about those states. This is more about the experience of grueling interstate travel. 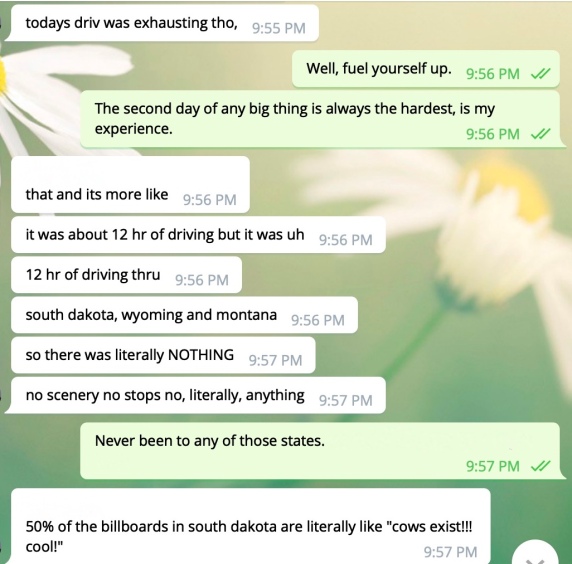 Meanwhile, I’m still, until next week, on a very flexible work from home status. Which means I get to go out for a walk every day. Yesterday, with the knowledge I would likely not see my oldest child for several months at least, I suffered a fit of nostalgia and walked around to see every house we lived in with our kids previous to our current residence. We’ve stayed in the same part of town, so my entire journey was accomplished in under an hour.

I didn’t take any photos of the homes because I didn’t want to seem creepy. But it was enough to see them and mull over my memories. First I went past the bitty little rental house where we had our first baby, the house where my self-identity changed forever. It had originally been a garage, later being converted to a home. The 8 x 8 bedroom we’d designated as the nursery was never used as such while we live there, as I discovered we all three got more sleep when the baby was in the room with us. We stayed there for two years, moving on to a different rental house with more space as we discussed expanding the family.

Rental house number two where we had child number two was a small, but not tiny, brick ranch house with an unfortunate tendency for the pipes to freeze in the winter. But it had a yard for outdoor play and was on a quiet, dead-end street with great neighbors, including two different retired couples who loved to fuss over the children the block. We liked living on that street so much that we bought a place only a few doors down a year later, the house I think of as our first true family home. We moved in when our kids were ages three years and three months respectively, and stayed until they were eight and five years old.

It not only had a lovely yard, but the back yard was fenced, something that had never meant much to me before I had children whom I sent out to play. There were two bedrooms downstairs and a big finished attic that we turned into a playroom/office. It was where my husband used duct tape and boxes to construct a playhouse within the playroom — a structure that kept the kids entertained for hours on end. It was where we lived when my oldest started kindergarten. Where we spent many hours drawing on the cement driveway with chalk, blowing bubbles while sitting on the front steps, seeing how high we could stack the spiky balls from the sweetgum tree before they started to tumble. It did my heart good yesterday to see that whoever lives there now is taking care of the place. The roof looks brand new.

And then the walk back to our current home, scene of many birthday parties, gatherings of friends after Halloween trick-or-treating, games of hide and seek, enthusiastic science experiments, homework battles, teenaged drama. There’s a parking area in back where the training wheels first came off my younger son’s bike, and where later, both kids would practice parallel parking between camp chairs with vertical poles attached. This is the house where we had a wheelchair ramp constructed so I could bring my mother to visit, where we’ve chased out bats and raccoons, where we’ve repeatedly fought city hall over proposals to make the street more like a highway, and where we are now problem solving how to set-up dual home offices for my husband and myself.

Life changes slowly and all at once.

I live in Missouri with one husband, a variety of pets and two food critics. I love writing, reading and making lists. I've written poetry since I was seven. A few years ago I branched out into short fiction and memoir pieces. I'm currently working on a novel. My day job takes place at a public library. In the present, I'm fortunate enough to spend part of my working day writing blog posts and occasional newspaper articles for my employer. It's a happy life, getting paid to do what I love. View all posts by thedamari